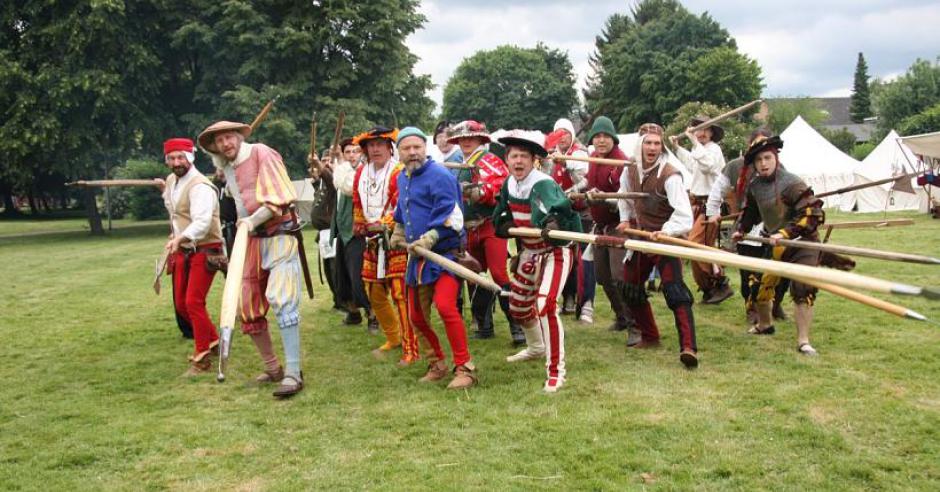 The emperor is coming!

So it was said in the year 1531 in Duchy of Jülich-Kleve-Berg, because Emperor Karl V visited the city of Düren ...

At the historic Annamarkt to Düren we provide this, as well
further city history of the 16th century.

Activities:
-> Historical Landsknecht recruitment
-> Formation Drill of the Landsknechts
-> presentation of the city defense as a battle
-> historical dual tournament

We are surching for reenacters of 15th und 16t century.

Apply! We need you!

The event represents parts of the exciting history of Dürener city between 1501 and 1543.

Düren, located between Cologne and Aachen, was the most severely damaged city in Germany during World War II. As a result, almost no historical buildings are preserved and the center is characterized by post-war architecture. Therefore, the feeling for the history of our city has been lost among the population - we try to change this with this event. The field camp takes place somewhat detached from the market activity in the center in ab big city park. Here you are surrounded by abundant green nature.

During 1501 an 1543 many soldiers and especially mercenaries were demonstrably staying in our town, so we set up a camp in Holzbendenpark (city park), in the middle of Düren. To do this, we primarily need soldiers and mercenaries  of the 15th and 16th centuries (especially Landsknechte). But also traders, craftsmen and other actors are very welcome.

Depending on the effort and distance our performers receive a cost reimbursement.

The Holzbendenpark offers plenty of space and plenty of idyll. Furthermore, we would like to offer a forum for exchange among many different groups. In addition to solid sanitary facilities, we also want to buy a tavern with a bath only for reenacters.

Formation drills of all interested parties as well as professionals. This should also provide the basis for our deployment and other activities in the city center

Here once again we present a historical "Landsknechtwerbung", as it took place. In Düren Landsknechte were recruited for city defense. Here we would also like to convey the Landsknechtwesen in parts to the visitors.

Here we would like to exemplify a skirmish in the city center. The extent of this endeavor has not yet been finally clarified - but welcome are footmen with polearms, hard-armed fighters with short weirs and hand-gunners and cannons. Unfortunately, we can not use crossbowmen or archers in the city itself.

Here we would like to offer all interested parties the opportunity to compete in a historic duel. This tournament we performed in light contact (not full contact, but also not Codex Belli). The goal is an exciting showdown in which the risk of injury is significantly reduced. But there will be no silly "on the shoulder tip". The individual rules for the tournament will be set separately.